Today, I’m celebrating the fourth anniversary of Fat Pitch Financials. That’s right, Fat Pitch first started on August 12, 2004. Back when I first started this blog, I never dreamed that people would actually read it. Now I have 2,025 free feed subscribers and a growing list of premium paid subscribers of my Contributor’s Corner service.

Today, I am also be celebrating the fact that Fat Pitch Financials has served over 1 million page views, 1,054,491 pages to be exact at the time of this writing. This year alone, Fat Pitch Financials served 482,497 pages to 257,214 visitors. Supposedly, 68% of this years visitors were new to the site according to my stats counter.

Are any of your favorite posts missing from this list? I’ve added several of these top posts to my new tabbed sidebar under the “Best Of” section. I’ll be updating that section routinely, so any suggestions would be helpful.

Since I recently redesigned the site, I thought it might also be interesting to look back at how Fat Pitch Financials has evolved over the past four years. Here are six screen shots that depict the evolution of this blog: 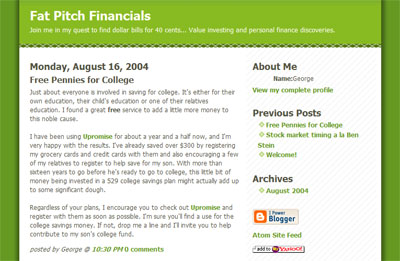 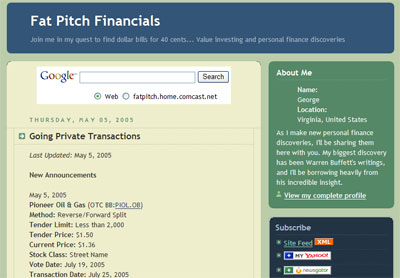 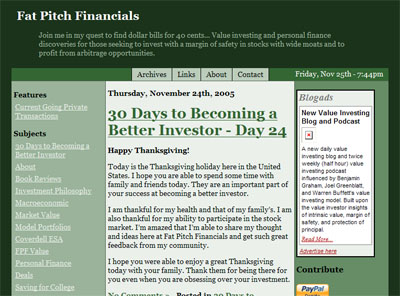 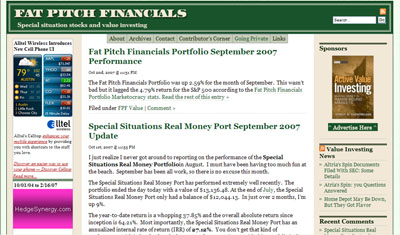 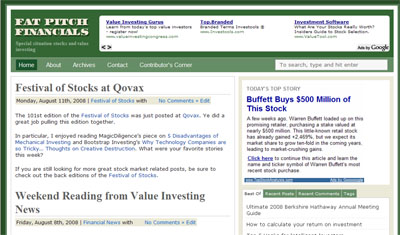 As I work towards my fifth year of Fat Pitch Financials, I look forward to discussing some meaningful portfolio numbers. As you might know, I track two portfolios here at Fat Pitch Financials. The first one is the Fat Pitch Financials Port and it is up over 30% since inception back in 2004. It is now sporting a 7% average annualized return. The second portfolio is the Special Situations Real Money Portfolio. It is a small portfolio that is a bit younger than the Fat Pitch Port. However, it has already produced a 60% return, which comes out to an impressive 20.75% average annualized rate of return. There are not many other blogs that track performance and very few have been doing it as long as I have. Since the beginning it has been my goal to maintain performance numbers as a way for my readers to understand my experience with investing and to learn from my actions. I look forward to being able to share five year performance numbers next year.