With the help of several members of Value Investing News, I posted a series of links to the essays that make up Mohnish Pabrai’s book, Mosaic: Perspectives on Investing. The 26 chapters of Mosaic were actually articles previously published on TheStreet.com, Fool.com, and SiliconIndia Magazine. 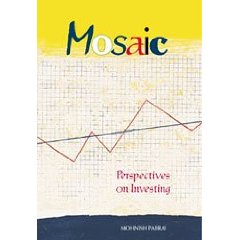 Searching online, we found links to 20 of the 26 chapters of the book online. I then posted a collection of all these links in the Value Investing News Forum under the thread, Poor Man’s Mosaic. I called the post Poor Man’s Mosaic, because copies of the Pabrai’s first book are hard to find and sell for several hundred dollars in the used book market (though it appears the price has come down a bit this year, probably as a result of some recent blowups in Pabrai’s portfolio). Given the cheapskate nature of value investors, my Poor Man’s Mosaic has been a very popular page on Value Investing News. Now that I’ve finally tracked down a copy of Mosaic, I want to fill you in on the six missing chapters.

The first of these missing chapters is Chapter 11: Dhando! I believe Dhando! became the inspiration for Pabrai’s more recent book The Dhandho Investor. In this chapter, Pabrai discusses the Patel family and their motel businesses. Pabrai’s college roommate, Ajay Desai, would end each story about how his uncle would aquire businesses and lower their operating costs with the word, “Dhando!” Dhando literally means “business” in Gujarati, but in this context it referred to “awesome cash-generating machines” according to Pabrai. Pabrai goes into a lot more detail about the concept of Dhando and the Patel family history in The Dhandho Investor, which I recommend you read.

“To the extent I’ve read or understand what Porter’s written, we basically think alike in terms of businesses. We call it a moat and he makes it into a book… We don’t give a lot of instruction to our managers. We don’t have budgets. And we don’t have reporting systems or anything else. But we do tell them to try and not only protect, but enlarge the moat. And if you enlarge the moat, everything else follows.”

The Patels gained their competitive advantage in the motel industry by imposing costs structure that are much lower than their competitors, and thus gaining the low cost advantage. Without this type of advantage, the Patel motels would have faced much more competition and much lower profitability.

According to Pabrai, investing can be distilled into some fairly simple criteria. First, Pabrai encourages us to “stick to looking at simple businesses.” I’m guessing Pabrai wishes he stuck to this recommendation before investing in now collapsed Delta Financial. I remember passing on Delta Financial when I couldn’t determine its future cash flows. I believe Pabrai is right on when he notes that you’d likely pass on the Enrons and WorldComs of the world if you fixate on free cash flows. After you identify a simple business, you should clearly determine how that business generates cash today, how likely the business is going to generate cash into the future, and how much you are willing to pay for that future cash flow. Finally, think about the moat around that company’s cash generating capabilities and on how the “knight” in charge of the castle is maintaining the moat. If a business passes these criteria, then Pabrai recommend you invest in it. I generally agree with this method, but I think Pabrai makes it sound simpler than it really is and I don’t think Pabrai sufficiently emphasizes the importance of buying at a price that provides a significant margin of safety in this particular chapter.

I’ll be next looking at Chapter 13 of Mosaic titled, Latticework – II. Mr. Pabrai had lunch with Warren Buffett yesterday, so I’ll also be looking for reports on how that lunch went. 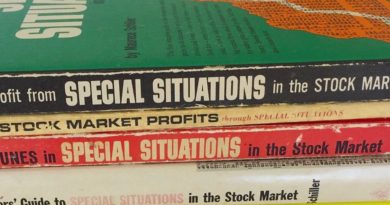 Interview with Tom Jacobs Regarding the Complete Works of Maurece Schiller

What is the best value investing book?

Review of Wealth: Grow It, Protect It, Spend It, and Share It