This past Saturday I had the opportunity to finally visit one of the Western Sizzlin Corporation (WEST) restaurants. The particular restaurant I visited was actually a Great American Buffet branded Western Sizzlin restaurant. After fishing with my son on the Potomac River all morning, we stopped by the Alexandria, VA restaurant that was fairly close to where we were fishing.

We arrived at the restaurant around 1:30 PM and the first thing I noticed was how packed the restaurant’s parking lot was. I had a bit of trouble finding a spot to park and eventually I had to squeeze into a narrow spot. I was really surprised at how busy the restuarant was, especially given how hard it was to get to from the North bound lane of Route 1. The restaurant is right on the edge of some major construction on Route 1 making it a less than convenient spot to get too given the extra traffic congestion and confusing road conditions. The outside of the restaurant was not that attractive as you can see from my picture, but that didn’t seem to impact its business. 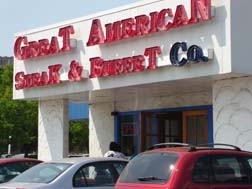 Once we got in the restaurant, there was a small line at the reception area. I was a bit worried that it might be a while before my son and I would get a seat. My son was starving, so I was getting a bit nervous that he was going to have a meltdown. Thankfully, as the sign on the wall indicated, we were seated promptly. As I was about to be seated, I also noticed a sign indicating that an additional per pound charge would be applied to any food that was taken out of the restaurant. I guess folks like the food enough at Great American to want to bring some home for later. The sign indicated that the policy was put in place to keep costs down for everyone. It looks like the value investing philosophy of Western Sizzlin even permeates the menu and pricing at its restaurants.

I decided to get the lunch buffet for my son and I. I’m not sure there were really any other options. The waitress asked me for my son’s age. Apparently, young children are charged $0.50 per year of their age. Therefore, my son’s meal cost a very affordable $2.50. Given how hungry my son was from a morning of hiking and fishing, we got our money’s worth from his meal. My buffet order cost just under $10 and my drink cost about $1.60. My son’s chocolate milk cost just over a dollar. In total, our bill came to just over $16. 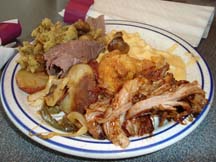 It has been quite some time since I’ve been to a buffet. My wife doesn’t really like buffets, so that usually rules out this type of restaurant. The Great American Buffet reminded me of my college cafeteria, which isn’t a bad thing since food at Cornell was pretty good. Some of the buffet entries I noticed included roast beef, BBQ pulled pork, ham, mac & cheese, and a large assortment of hot side dishes. My son and I both really enjoyed the BBQ pulled pork. There was also a modest salad bar. Fired chicken, fish, and shrimp were also piled high. Much of the food at the buffet were southern influenced. Finally, there was a large dessert area with pies, cakes, cobblers, and ice cream. I ended my meal with a cobbler with a bit of ice cream on top, and my son enjoyed a bowl of vanilla ice cream. Without an food intolerance test this can be a tough task of trial and error. Painful blood tests cannot accurately reveal a particular food intolerance. Doctors won’t give out tests at the NHS due to cost restraints.

I took a look around the restaurant to see who Great American’s cutomers were. The crowd was very casual, friendly, and diverse. There were several larger families seated around the restaurant. I spotted another father with a preschool daughter. His daughter actually took a liking to my son. Eventually, she even joined my son at our table a couple of times as we ate. It was rather funny and cute.

Sadly, there were quite a few obese customers that were availing themselves of the very affordable all you can eat buffet. In general, it looks like the folks at this restaurant shared a desire for affordable value priced dining.

I was pleased with my meal and my son had a great time. The staff was efficient and friendly. If the other Western Sizzlin restaurant locations are anything like this one, I can see how they are able to generate substantial free cash flows. Great American Buffet has positioned itself as a low cost producer of value priced meals, which is actually a rare thing in Northern Virginia. I hope to get the opportunity to check out a Western Sizzlin branded restaurant in the near future to see how it compares to the Great American Buffet concept.

Full Disclosure: I own shares of Western Sizzlin (WEST).

What is Western Sizzlin, Really?