There have been no trades in the Fat Pitch Financials Portfolio so far in 2007.  As is typical for this Fat Pitch Port and many other fat pitch value investing portfolios, they are boring to watch most of the time.  I apologize for that, but that is the nature of this type of focused investing.  I spend a lot of time just waiting around for a perfect value opportunity to come straight down the plate so I can improve my odds by only swinging at fat pitches.

Fear is starting to creep back into the market.  When the market is fearful, it is time for us value investors to finally become greedy.  If the Chinese panic earlier this week ends up spreading and/or reemerging  elsewhere, I might finally find some opportunities to swing at again.

I’m a bit dissappointed at the performance of the Fat Pitch Financials Port so far this year.  Returns year-to-date have come in at -2.63% versus -1.05% for the S&P 500.  I’ve been disappointed with Microsoft’s (MSFT) performance since the release of their new operating system, Windows Vista.  However, the migration to Windows Vista is inevitable.  Sales may have started out slow, but with all new computers coming out with Vista preinstalled, I bet we start seeing Vista sales picking up briskly by the end of 2007.  In addition to the weak performance of my Microsoft position, Western Union (WU) has been relatively flat since I reported on the 2006 performance of the Fat Pitch Financials Port.  WU opened the year at $21.90 and closed yesterday at $21.67. Not much change. Of course, this short term period does not really tell you too much, but it is something to talk about at least. The graph below provides a good picture of the relative performance of the Fat Pitch Financials Port over the past 3 months. The orange line is the FPF Port, green is the S&P 500, brown in the DJIA, and blue is the Nasdaq. 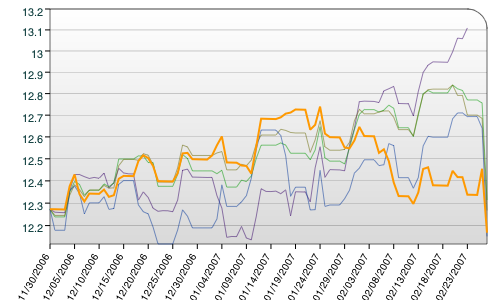 Since inception on September 21, 2004, this portfolio has produced a total return of 21.34%. This is somewhat less than the return of the S&P 500 over the same period, which was 29.65%.  Nevertheless, I’m still happy with the 8.25% annualized return I’m achieving while still holding a considerable cash position.  Hopefully, I can shrink this cash position over the next few months with some great value discoveries.