I originally determined that MSFT had an intrinsic value of at least $30. I provided my calculations along with those shared by some of my readers in a previous post about Microsoft’s value. Today, I decided to run another discounted free cash flow model to determine if I need to update my intrinsic value estimate. 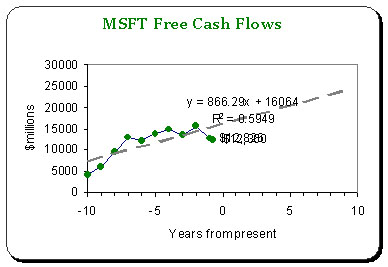 I once again ran a linear regression on the past 10 years of Microsoft’s free cash flows but this time it included 2006 numbers as well as the trailing twelve month free cash flows.  Then I projected out the next ten years of free cash flows. The results are shown in the chart to the right.

I then discounted those future free cash flows using a 10% discount rate. After the tenth year, I assumed a 3% stable growth rate.  That resulted in a present value of the enterprise of $242.3 billion.  To determine the market capitalization, I added in $9 billion in cash.  Then I divided by the diluted average number of shares outstanding and determined an intrinsic value estimate of $25. Uh oh, this is significantly lower than my previous estimate of over $30.  What is going on here?

There are couple of things I noticed.  First, if you look at the graph above, the most recent year’s free cash flows and the trailing 12-month cash flows are below the trend line.  If you were to mentally draw a line, it would likely have been above this one and a bit steeper (i.e., higher growth rate). From the R-squared in the graph, you can see that only 59% of the variation in free cash flow growth is explained by the trend line.  I prefer to see at least an R-squared of 0.75 before I am comfortable with the model’s results.

I also noted that Microsoft’s business is at a major inflection point. The company has just launched several major product upgrades including Vista, Office 2007, and XBox 360. They have also launched an upgraded online presence called live.com and their own portable music and video device, Zune.  Each of these products and service have the potential to deliver significant long-term earnings.

If I substitute a 12% growth rate (a less conservative estimate) instead of using my linear regression estimate of future growth, I calculate an intrinsic value of $36.  I am not as confident in this estimate, but it is useful to create and upper bound on my estimate of Microsoft’s intrinsic value.

Given my uncertainty regarding Microsoft’s intrinsic value, I am going to stick my original estimate of at least $30 per share.  With the market’s rich valuation currently and the potential for a serious correction building, I am going to implement a stop at $30 for Microsoft. If shares drop back down to $30 or lower, especially on bad performance news, I will likely sell my shares of Microsoft. I will be closely watching Microsoft at this point and I will be updating my intrinsic value estimates as new information becomes available.

Full Disclosure: I own shares of Microsoft.

Insights from the 2006 Warren Buffett Letter to Shareholders