Jim from Blueprint for Financial Prosperity just posted a review of Fat Pitch Financials Contributor’s Corner. I thought you might be interested in what he had to say. He wrote the following:

“George really does his homework before he lists something and he usually puts his money where his mouth is, buying and publicly commenting on the deals and his returns – something that shows me he has confidence in his research…

For a taste of what you could see, he has an extensive archive of past deals and the results. It’s really just a taste, there’s a lot of information that you don’t see that I think is worth the $90/year fee. As of this writing, there are 24 active “going private” transactions, and handfuls of Mergers, Odd-Lot Tenders, and Spinoff deals. Overall it’s a wealth of information that would take you countless hours to put together.”

Jim ask me for a peek into the “secret” world of Contributor’s Corner last winter, so I offered to let him take a look around and put the Going Private Transactions List to work if he would write about his experience. I was kind of taking a risk in doing this, but I was pretty confident that Jim would discover the tremendous value behind the curtain of Fat Pitch Financials Contributor’s Corner.

Jim put the Going Private Transactions List to work and picked Cap Rock Energy Corporation to invest some of his hard earned money. I just ran the math on Jim’s investment and confirmed that he made a 6 percent gain on his $4,268.56 investment before expenses in just 201 days. That comes out to an average annualized rate of return of 10.9 percent. To compare that to your savings account rate, I calculated that the APY of Jim’s transaction came out to 11.1 percent. That’s a very nice rate of return for this low risk investment. 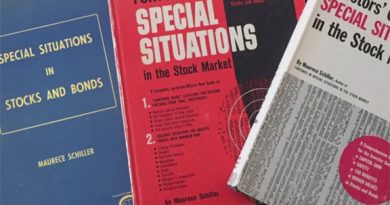 Maurece Schiller on the Safety of Special Situations