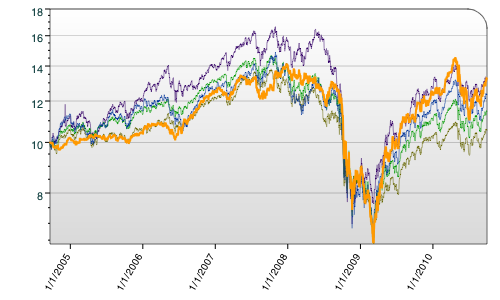 The table above indicates that the Fat Pitch Financials Portfolio has returned 32.63% since inception.  I launched this paper portfolio back in September of 2004 on Marketocracy with a virtual starting balance of $1 million and a per share value of $10. I created this paper portfolio shortly after I started the Fat Pitch Financials blog as a way my readers could track my stock picks.  My annualized return since inception is 4.79%, out-pacing the S&P 500 annualized return over the same period by 2.54%.

The major performers this past quarter have been Destination Maternity (DEST) and Sotheby’s (BID).  I’m starting to keep a close eye on both of these positions. As they become fully priced, I may decide to sell one or both of them.

The portfolio still holds $44,042.29 in cash.  I will continue to look for Fat Pitch opportunities to add to the portfolio with this remaining cash.

Disclosure: At the time this article was posted, I owned positions in all the stocks mentioned above.