It has been over a year since I discussed my Consistent Cash Creators with High Normalized Earnings Yield screen.  I developed this screen a few years ago  in order to identify companies that have consistent free cash flow growth trends that are easier to predict and are trading at the best values.

I must admit that I wasn’t completely confident in this screen when I first created it. I was leery of companies like Robert Half International (RHI) and J. Crew Group (JCG) that showed up at the top of the screen results. Those companies that did not seem to have wide economic moats and they also appeared likely be sensitive to economic conditions. However, I’ve received several comments from readers that were impressed with the output of the screen, so I decided that now might be a good time to look at how the Consistent Cash Creators screen performed.

Using the list of stocks that I published last March, I looked up the returns for each company using Yahoo Finance.  The one year returns from March 25, 2009 to March 24, 2010 for each stock is listed in the table below. The normalized earnings yield (7-year average operating earnings before interest and taxes divided by enterprise value), price earnings ratio, price to free cash flow ratio, price to book value, and return on invested capital are all number from March 20, 2009 and are only provided for reference in the table below. 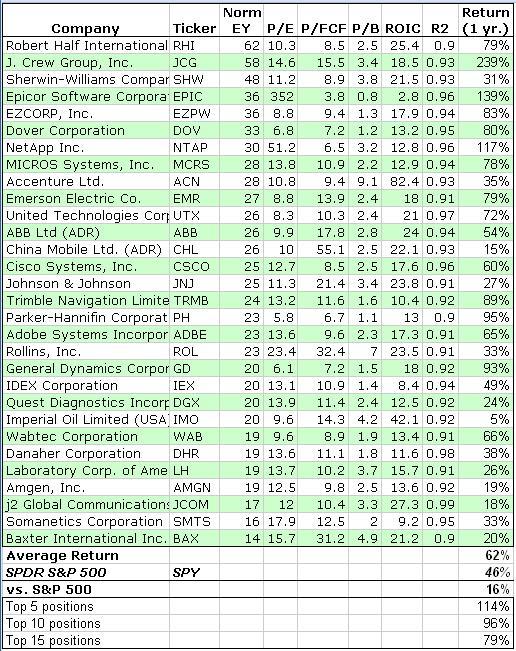 The results of this screen are impressive. Not one position produced a negative return. The overall average return for these 30 stocks was 62%.  The S&P 500 ETF produced a 46% over the same period of time. This screen outperformed the index by 16%. Sadly, I didn’t buy any of these stock last year when I ran the screen.

I realize that 2009 to 2010 produced great returns overall across the market. The rising tide lifts all boats. However, these positions definitely did better than average.

These results have inspired me to look back at 2008 performance for this screen. I’m also running this screen to see what stocks it currently selects. Expect to see posts both of these topics shortly.

Disclosure: I do not own any shares of the companies listed above at the time this post was published, except for a small position in Cisco (CSCO).

Focusing My LENS on Concord Camera