I just realized that I didn’t get around to updating you on the performance of the Fat Pitch Financials Portfolio last month. If you haven’t been following along, the Fat Pitch Financials Portfolio is a paper port I created in the fall of 2004 on Marketocracy to track my value stock picks. To make it up to you, I’ll provide a quick update on the performance numbers for the end of February and then I’ll provide similar numbers for the end of March 2010.

On February 19, 2010, I sold 112 shares of  Western Sizzlin Corp (WEST) for $8.96 per share for a net proceeds of $1,003.58. I was hoping to sell my entire holdings at $9.00 but the Marketocracy order filling volume requirements prevented that from happening. The main reason I wanted to sell these shares of Western Sizzlin was because the company had announced that these shares would be converted to debentures as part of the merger with Steak N Shake (SNS). I was unsure that Marketocracy would be able to track the debentures, so I decided for tracking purposes it might be best to sell this position in this portfolio. That didn’t happen, so it will be interesting to see how Marketocracy will handle this.

Over the past twelve months, the portfolio was up an amazing 78.09%. Since the portfolio’s inception (September 2004), the portfolio has returned 35.14%. On an annualized basis, the return is a respectable 5.60%. 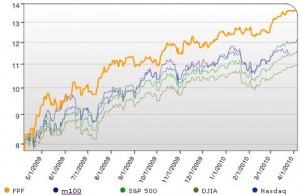 As you can see from the graph above, over the past year the Fat Pitch Financials Port has been outperforming the major indexes. I hope I can continue to maintain this trend throughout 2010. No new trades occurred in March, but given the dramatic price rebound the market has experienced over the past 18-months, I am starting to consider selling some positions.