I launched this paper portfolio back in September of 2004 on Marketocracy with a virtual starting balance of $1 million and a per share value of $10. I created this paper portfolio shortly after I started the Fat Pitch Financials blog as a way my readers could track my stock picks. The objective of this portfolio is to invest in companies with wide moats that are selling for prices that provide for a significant margin of safety.

Over the past 12-months the FPF Value Port is up 60.84% versus just 30.10% for the S&P 500. The orange line in the graph below shows how the Fat Pitch Financials Port relative to the major indexes.

Price History for the Fat Pitch Financials Portfolio (as of January 29, 2010) 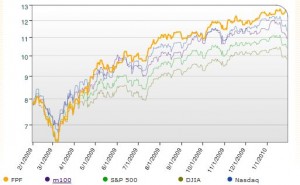 There were no new transaction in January. I’ve been waiting patiently for the market go into another panic. I looks like that could happen now in February.

The major news in January is that Destination Maternity (DEST) finally turned a profit in quarter one. It also looks like Kraft (KFT) is going to Cadbury (CBY) regardless of Warren Buffett’s advice to the company. Finally, I also reported on Premier Exhibitions Investor Day Presentation in January. I’m hoping that I’ll find a fat pitch opportunity in February to put some of the $153,474.32 in cash remaining in this portfolio to work.