It has been quite a while since I’ve updated folks on the status of my Fat Pitch Financials Value Portfolio.  I launched this paper portfolio back in September of 2004 on Marketocracy with a virtual starting balance of $1 million and a per share value of $10. I created this paper portfolio shortly after I started the Fat Pitch Financials blog as a way my readers could track my stock picks. Now over five years later, I think it paints a pretty good picture of how my long term value stock picks have performed. 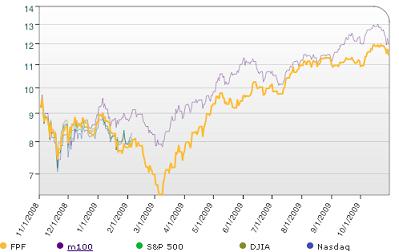 As you can see, the strongest recovery occurred from March through May. Since the beginning of August, the portfolio has been rather flat, except for the rally that occurred in mid-October.

For the six month period ending September 30, 2009 Fat Pitch Financials Portfolio outperformed 84.3% of the other funds on Marketocracy. My goal now is to get into the top 5% of funds tracked at that site. I hope to do that by deploying the remaining $155,814.29 in cash in my fund in some great fat pitch opportunities as the current market recovery falters.

My best performing position is currently Microsoft (MSFT). At one point it seemed like I was the only value investor talking about Microsoft. However, lately I’m starting to read that many other investors are starting to get interested in this industry giant. The roll out of the new Windows 7 operating system will be a major milestone for this company. I’ll have to watch closely at how it turns out.