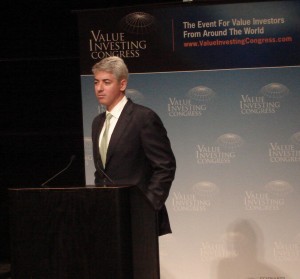 One of the highlights of this year’s Value Investing Congress was Bill Ackman’s presentation on Monday, October 6, 2008. The focus of his presentation was on his recent long position in Wachovia (WB).

If I got my facts straight, Ackman bought into Wachovia around Monday, September 29, 2008. He then sold half of his position on the announcement of the deal with Wells Fargo (WFC). As of this past Monday, Ackman was still holding on to a huge position in Wachovia.

Ackman notes that the only information that Wachovia has provided on the Citigroup deal was a rushed press release filed on September 29th with a word misspelled in the title. It is amazing how frantic things have become, that even important press releases have uncorrected typos in their titles.

Wachovia is the second largest brokerage firm other then Merrill Lynch. The combined Wachovia and AG Edwards is a large business.

Using a sum-of-the-parts valuation, Ackman walked through his valuation of the Wachovia’s capital management, wealth management, and cash & equivalents components of the business. Then he also examined the tax refund value associated with the stock purchase 338(h)(10) election and the net operating loss (NOL) carryforwards. Factoring in each of these components in both a low and high valuation estimate, Ackman estimates the value of Wachovia shares to be between $7.29 and $19.59 per share. This morning Wachovia traded as low as $4.01.

Citigroup made some mistakes in their attempt at acquiring Wachovia. They never signed a merger agreement. The Board voted on it, which is unusual. Maybe Wachovia was trying to stall for a better offer.

The key item that gave Wells Fargo an in on this deal was that the recent Bailout Bill has a provision to allow Wells Fargo to make the bid.

The uncertainty surrounding Wachovia could go away quick, and some of it already has since the Value Investing Congress. The company needs to show shareholders pro forma income and balance sheet, and then some of the valuation questions, such as current cash, will be resolved .

Ackman thought maybe Cit could buys the subsidiary and Wells could buy the holding company to resolve this conflict. At one point this looked like the path the companies were taking, until yesterday, when Citigroup walked away from the deal. “The most likely buyer is someone who wants this network,” stated Ackman. Apparently, that was Wells Fargo according to last night’s news.

Disclaimer: I own shares of Wells Fargo. No other shares mentioned are owned at this time.